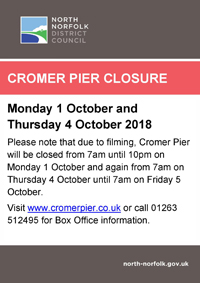 The pier has an impressive filming location back catalogue for television and big screen productions, attracted to it’s unspoiled and grand presence.   To name but a few, Danger UXB back in 1979,  Most Haunted featuring Yvette Fielding in 2009,  In love with Alma Cogan in 2012 starring the late Roger Lloyd Pack,  Alpha Papa starring Steve Coogan as the irrepressible Alan Partridge in 2013,  David Walliams starred in the Agatha Christie drama Partners In Crime 2015,  Bollywood movie Housefull 3 in 2015,  Babs, a BBC production looking back at the life of Dame Barbara Windsor in 2017,  Antiques Roadshow 2018 and the Next and Marks and Spencer fashion collections.

To allow for the filming there will be pier closures on Monday and Thursday.  Tickets for upcoming shows can be purchased online at cromerpier.co.uk or over the telephone on 01263 512495 (please be patient as we will only have one telephone line available).   There may be access restrictions during the dressing process on Tuesday and Wednesday, so if you are visiting us, please be aware and respect the crew at all times.