A magnificent opening for the Cromer Pier show 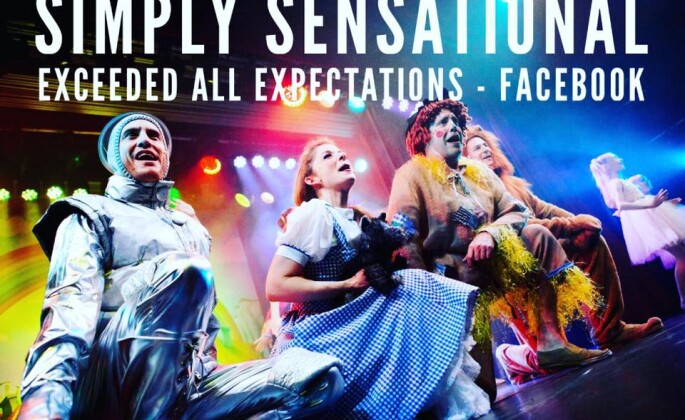 Wow, what a magnificent opening to preview week for the spectacular Cromer Pier Show. On opening night, the 22nd June, the show was packed with a full house audience who were entertained and delighted by the outstanding live variety on stage worthy of any West End production. The show received rapturous applause from a lively audience and the outstanding reviews have already started rolling in on our trip advisor page

The show is a precious summer seaside tradition for generations of families and the production team work hard to ensure the show develops and stays relevant to an increasingly modern and sophisticated audience whilst remaining true to the rich history of traditional variety for which the show has made its name regionally, nationally and internationally.

Mr. Tim Wardley, National Piers Society chairman described the show as theatrical Utopia and as close to perfection as can be possible. Read his full review below:

“Saturday night saw the opening of the 2019 variety offering from Openwide Coastal as the world’s only full season end- of- pier variety show made its grand entrance for this year.

I was anticipating, indeed demanding something special this year given the strong cast and comedy writing talent at Openwide’s disposal for 2019. As a seasoned producer and promoter of variety entertainment it takes a lot to impress me, but impress this show certainly did!

The auditorium, resplendent with new stage and special effects lighting burst into high energy life from the first beat of the band and did not falter in maintaining the pace, engaging the audience and setting the scene for two hours of high quality, magical entertainment.

Headliners this year are the superb combination of Paul Eastwood and Graham Noble ( the man called G).
Paul is the cheeky chappie from Essex making a welcome return to the Cromer stage who has built a reputation as one of the most versatile and popular comedians the UK has to offer. Within his beguiling interaction with the audience I see elements of the iconic variety greats of the golden age. He has the auditorium in stitches with his delivery which appeals to all ages. A family show needs a special kind of comedian and compere. Eastwood is one of the best, seamlessly driving the show with enthusiasm and vigour.

” G” is breathtakingly stunning. I said last year he was a new relevation of talent. This year he has matured and has become an even greater revelation as his sheer comedy genius shines through. A highly talented comedy writer, as soon as he is given a stage he commands and owns it. The gangly, long haired individual bedecked in the most outrageous attire which have become his trademarks takes the audience through an A-Z of comedy impressions which I could have watched all night. He has the voices and mannerisms honed to perfection. With Eastwood he makes a superb double act, the pair feeding off each other superbly making the audience laugh so much it almost hurts!.

No variety show would be worth it’s name without some West End magic. That requires superb orchestration and fine vocalists to do justice and this year’s Cromer Pier Show has both. Harvey James provides the male lead, delivering strong, powerful performances with a voice which commands the stage. His vocal range is superb, and the musical arrangement skills of Nigel Hogg allow us to enjoy his performances to the full.

Emily Yarrow returns this season as the female lead vocalist. She brings together the ingredients of superb beauty and stage presence with one of the finest female voices I have ever heard. Only a philistine could fail to be moved by the emotion she injects to her performance. Indeed it brought a tear to my eye listening to her glorious interpretation of Whitney Houston’s hit from ” The Bodyguard” sung with pitch perfection and electrifying emotion worthy of the thunderous applause from the spellbound audience.

This years speciality act are Matthew Pomeroy and Natasha Lamb who bring a new twist to illusion and magic with imaginative use of props and great audience interaction. Matthew has superb command of the stage beyond his young age and it a talent we will be hearing a lot more of in the future. Cromer’s famous pier show has created many stars over the years and I predict another is in the making with this act. Remember….you saw them at Cromer first!!.

No self respecting variety show can be without some big stage dance numbers and this years show has excelled as the Seaside Special dancers kick and flick their way through some superbly choreographed routines of international flavour. The junior dancers from Marlene’s Dance School add that magical “ahhhhh” factor as they wow the audience with delightful sequences from ‘The Wizard of Oz’.

If there is a theatrical Utopia I found it in Cromer this year. A show as close to perfection as can be possible, with something for the whole family to enjoy and delivered by the cast with passion and genuine enthusiasm which leaves the audience shouting for more. But don’t take my word for it, come and see for yourself. Tickets are available now for all performances from the friendly pier box office staff. 01263 512495 or book online at www.cromerpier.co.uk

Cromer Pier Show 2019 – proudly supported by the National Piers Society – it really does not get any better than this! See you there!”

Tickets are still available for preview week performances all week until 28th June with a whopping £5 off better view tickets! click here for more details.