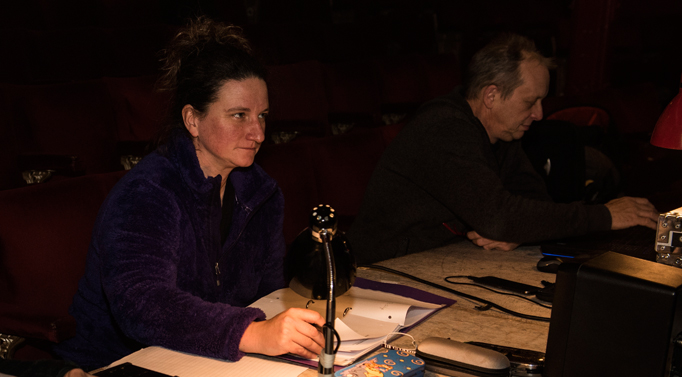 The famous Cromer Pier Show boasts the highest production values, worthy of a West End Show, right here, in  one of only five remaining end of pier theatre’s in the UK.

The partnership forged with  Visual Elements in 2004 results in a slick and seamless, unique and traditional variety show loved by generations of visitors.

Visual Elements have a very impressive portfolio of clients, emotionally engaging  audiences in film, fashion, Television,  Events and Corporate, plus some rather unusual and memorable projects, a Saudi Royal Wedding, A British Aerospace Roadshow with conferences actually on board the aircraft (how cool is that!) and a touring mobile recording studio for Vodafone!   here are just a few of the fantastic projects:-

Amanda began her career as a stage hand at the Assembly Hall Theatre Tunbridge Wells and thrived during an apprenticeship as Theatrical & Domestic electrical engineer, achieving Assistant Chief Electrician.  Spreading her wings, she became freelance and moved into the world touring sector, working on plays, musicals & rock n roll. Returning to the UK she headed for the West End as a part of the sound department team on a variety of West End Productions and other venues including theme parks.

Mike’s many professional achievements include restoring the famous “Spider” lighting rig and leading it’s integration to a live lighting console at the famous “Venue” Victoria, London.   A venue famous for it’s great live music in the 70’s and 80s  including appearances by legends The Alarm, Blancmange and Depeché Mode.  It became the first club  to feature a full time lighting operator for it’s Bands and Clubs evenings.

During the weeks leading up to the season  Amanda and Mike will get together with Di Cooke the Director, Deviser and choreographer of our famous show since 2002.  The production team will review the specific tech requirements for show 1 and show 2 and produce full lighting design and plan.  The equipment then gets delivered to Cromer  five weeks before the show opens so that the fabulous Pier tech team can rig it in before the set “get in”.  The seaside becomes home for the week for Mike, Amanda and Tommy  leading up to opening night.  Early mornings and late nights are guaranteed, as are  copious cups of  tea and coffee, Fish and Chips, Cromer Crab and Ice Cream.

The show is always moving with developments in technology and is programmed to timecode.  This development means that numbers can now run automatically when sent timecode with audio.  This achieves a seamless and accurate effect and consistency across each performance.   The number of programmed cues of each show has increased from around 500 cues to 1100 cues, due to not needing a  physical trigger.  Mike will happily seat for hours, tweaking the cues to achieve the first class finished performance and the lighting for the contemporary ballet in show 1 of the 2015 show took a whole day to perfect!   To get  “that look” it is essential that all the lighting states look right with the costumes, the performers are lit in the right places and that the perfect ambience is created for each element.  Programming means that you have to give each light an intensity, colour and position for each state that you see on stage.

The LED and intelligent lighting equipment for the productions in 2017 supplied by Visual Elements to supplement the in-house rig are worth an eye watering £70,000 and will include:-

We are delighted to be in partnership with Visual Elements to bring you our famous show, now the only end of pier show in the World