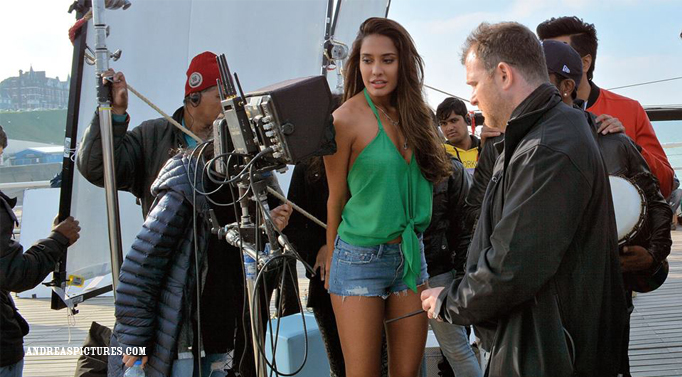 Cromer Pier is one of the most picturesque landmarks on the Norfolk coastline. It is undeniably a beautiful and traditional looking Victorian Pier. It’s appeal attracts film makers and TV producers, from all over the world, to use it as a backdrop in various films and TV series. Here’ s a few that we know about….

In 2011 the Pier and Theatre was the focus for the film “In love with Alma Cogan”, starring Roger Lloyd-Pack, which follows the story of a manager of a pier theatre who realises it is time to move on.

In 2013 Steve Coogan and Colm Meaney (and lots of other cast and crew) came to Cromer to shoot the final scenes of the “Alan Partridge: Alpha Papa” film on the Pier. The final showdown (and shoot out) of the film happened on this very Pier! In November 2014 the town got very excited at the arrival of David Walliams, who stars in Agatha Christie’s “Partners in Crime” alongside Call The Midwife’s Jessica Raine and Four Weddings & A Funeral and The Vicar of Dibley Star, James Fleet. This series was aired in the summer of 2015. The Pier has also featured in the television programmes “Location Location Location” and “Most Haunted”. In August 2015 Freddie Flintoff turned up in his chip van to do some crabbing off the Pier, as part of a Sky 1 series “Lord of the Fries”. Our most unusual claim to fame saw the Pier taken for a big dance number, for a new Bollywood Film “Housefull 3”, which was launched in India in Spring 2016.

2017 saw the Pier featured in the BBC drama “Babs”  The dramatised heart warming story of actress Dame Barbara Windsor.    Michael Portillo and The Great British Railway Journeys featured the Pier during a visit to Cromer and Michael even tap danced on stage with deviser Di Cooke and the cast of the 2017 Cromer Pier Show.

More locally, Cromer Pier regularly plays host to the annual Crab & Lobster Festival, and we are also an integral part of the Cromer Carnival every year.

At the beginning of each year thousands of locals and tourists flock to see the New Years Day fireworks display on the Pier. In 2014 the Pier hosted a hugely successful Open Day to celebrate 200 years of British Seaside Piers. The Pier is becoming more and more popular as a unique choice  wedding venue and  has been a location for marriage proposals and funerals!

The Pier is a true hub for the local community to come together and a crowd puller for tourists who choose to holiday in Norfolk throughout the 12 months of the year. North Norfolk is an all season destination and beautiful regardless of what month you visit and with all of these famous activities going on, you never know who you may see on Cromer Pier!