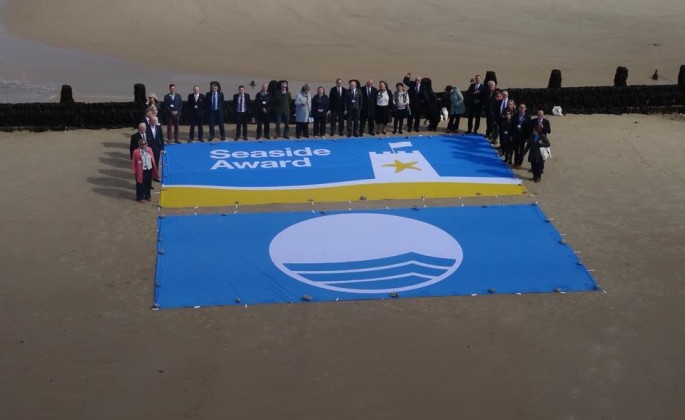 A slightly grey and blustery morning certainly didn’t dampen the spirits of the guests that assembled to celebrate the Seaside Awards in association with Keep Britain Tidy on the pier and Cromer beach.   A fantastic achievement for North Norfolk District Council celebrating no less than six Blue Flag beaches in the district, more than any other district in the UK.    Blue Flag status for Cromer, Sheringham, Mundesley, East & West Runton and Sea Palling with Hunstanton main beach and Wells-Next-The-Sea scooping up Seaside Awards. Following  a delicious buffet served in the Pavilion Bar including an impressive crab shell ice sculpture packed with delicious seafood.  Accompanied by The Kavolini String Quartet, when lunch was finished, the celebrations were taken down onto the beach and a photograph of the proud winners captured on the glorious sands, the sun even made an appearance to complete the day.

Cllr John Lee, Leader of North Norfolk District Council, said, “The Blue Flag is the quality mark for our beaches and they mean that those visiting them can be sure that they are clean, safe and meet the highest environmental standards, as well as the tough international bathing water quality standards.
Cllr Becky Palmer, Cabinet Member for Leisure & Culture, added, “The fact that winners from around the country will visit Cromer is a reflection of the high standards delivered across North Norfolk’s beaches.”