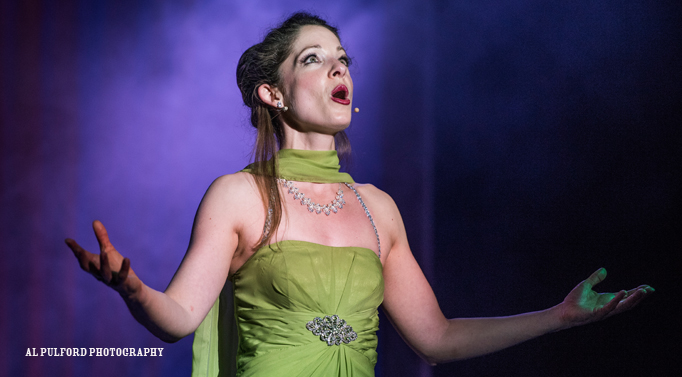 We know that you will be impressed by the amazing operatic voice of our lead female vocalist, Emily, therefore our General Manager, Jo, arranged an interview to get to know a bit more about Emily….

I am originally from Buckinghamshire. Now I live with my husband in Stansted, Mountfitchet in Essex.

We own no animals and have no children. We both shy away from responsibility!

I was given one very small role in the school play, aged eleven, as I was so desperately shy. (I think that they had to cast a large number of people and I was available). It wasn’t until university that I was given some musical theatre and opera roles which I was just about brave enough to do.

One month after graduating from drama school I was given the role of Kitty Bennet in a production of Pride and Prejudice the Musical. It was as bad as it sounds, and it was the last production ever to be staged at the Westminster Theatre.

To still be singing!

I was singing in a big choir for a concert at the RAH three years ago and there was quite a lot of time between the rehearsal and concert, so, when there was no-one on stage or in the audience, I stepped out onto the front of the stage where the soloists stand, and sang “Un Bel Di” from Madam Butterfly. No-one saw or heard me, but it was brilliant.

Either the now demolished Westminster Theatre or a terrifying school in east London!

Whilst doing a quick costume change mid-show, in the toilets, I managed to drench one trouser leg in the toilet bowl and had to go on with one wet leg!

To have a lovely time with my fellow performers on stage and giving the audience a fantastic show.

My parents who gave me music lessons and let me study what I wanted and encouraged me; the many teachers who’ve guided me; plus the ones who said they didn’t think I could, and my husband.

There is a man called Paul Martin who used to dress up as a lady called Trinity for his cabaret act. He was so entertaining with his singing and comedy combined and I wanted to do what he does and make the audience laugh. And make them cry too. The worst thing is when the audience feels nothing.  I also heard a recording of the famous quartet from Verdi’s Rigoletto as I had to learn  the soprano part for a show. It was Pavarotti and Joan Sutherland singing the tenor and soprano and it is such an amazing sound. I want to sound like that. And Doris Day.

My husband, parents, sister and family and my friends from London.

What will you be doing on your precious days off ?

Going crabbing, cycling and doing a bit of baking.

Any additional information you’d like our audience to know about?

I am absolutely thrilled to be cast in this show!