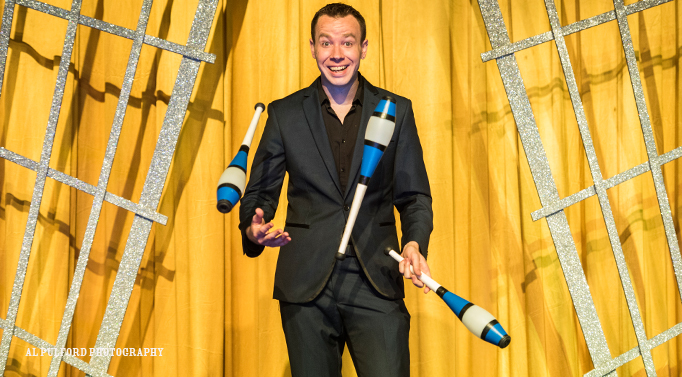 I was born in Kingston Upon Thames and then moved to Newcastle Upon Tyne until I was eleven, then we relocated to Sydney, Australia where a home has been for nearly twenty years now.

My life is way too “on the road” to have pets, unfortunately, but eventually I would love to have some pets.

I first started performing when I was about seven years old as an extra in Byker Grove then, from there, magic took over my life, which then led me to juggling. I ran away from home and joined a circus when I was about fourteen and that’s been my life ever since! Travelling the world, performing and making people laugh.

My first professional experience was being a background extra on Byker Grove, a children’s  TV series which was aired between 1989 and 2006 on BBC1.

Too many places to mention. I have been on and off cruise ships for the last eight years. I travelled the world with the Flying Fruit Fly Circus. Notable performances have been Udderbelly, Sydney Olympic Games, Commonwealth Games, Glastonbury Festival, World Expo Japan, and the list goes on.

Having my own show last year for a month at Underbelly at Southbank in London. It was in the fabulous Spiegeltent and received a 5-star review from London Theatre and yPlan.

Performing my solo show in London was the best experience of my life and one I would never forget. Not many Comedy Jugglers have achieved having their own show for a season in Central London so I am very proud of this accomplishment.

I did a corporate gig two years ago in the UK where I was told I was doing a show in a theatre, turned up and there was no theatre, so I was stuck in a corner juggling with people trying to walk past me and no one cared!

When I was in circus school I was doing a skill called plate catching – a live show. Basically, people throw metal plates at me very fast and I catch them quickly. One plate went behind me and I turned to catch that and turned back and got five plates straight into my face, which in turn shattered my teeth. The show must go on, though, so we picked them up and tried again while blood was everywhere.

My life is always on the move, I’m looking forward to actually living somewhere for three months and not moving. I will miss the Australian weather, though. To give you an example I was back in Oz from January until the end of May. I did twenty ship contracts and was home for ten days out of the five months.

Obviously my parents and also my amazing trainer Per Westman from the Flying Fruit Fly Circus. A gentleman called Pete Matthews (another comedy juggler) got me onto ships years ago and most recently a famous South African comic Barry Hilton has been helping me a lot and trying to organise a South African tour. Obviously, the reason I have Cromer this year though is because of my amazing manager Simon Quarmby.

Hopefully a few friends from ships will come and obviously my family who actually all live back in the UK now. I’m the only Aussie now.

Exploring what Norfolk has to offer! I only just found out that Norfolk isn’t a city. I was planning on going to Norfolk for a day… whoops.

I am raising money for Cancer Research UK by juggling and completing different juggling challenges for 365 days. Feel free to nominate objects or activities to juggle on. Head to www.365dayjuggle.com

Keep up to date at www.jamesbustar.com