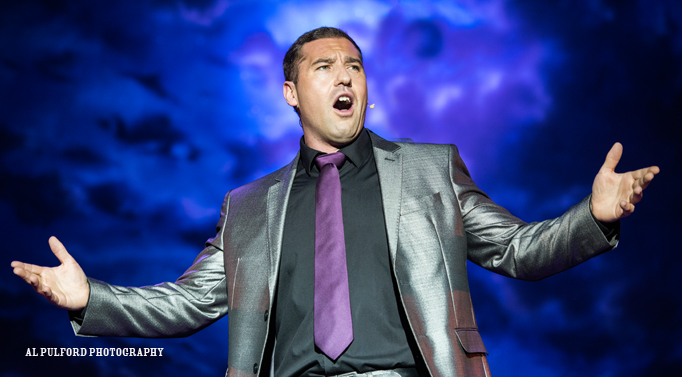 I live in Rotherham and still do.

I used to have a black labrador called Sam and a boxer dog called Shelly. We also had a cat called Tommy and he lived for nearly eighteen years of my life.

Started at sixteen in the am drams. My first show was Oliver where I played Bill Sykes at the Rotherham Civic Theatre. Then I was hooked.

My first pro experience was as an extra in Coronation Street.

I’ve performed all over the world on cruise ships and theatres. From all standard of cruises up to 6 stars.

My biggest achievement would be still working after eight years of the show. I’m proud because I’ve achieved so much and I now tour my one-man musical theatre show all over the country. With regular gigs at the Warner Hotel Resorts.

I’ve worked with many celebrities from Kylie Minogue to Josh Groban. Even TV stars like Matt Baker of The One Show, Lisa Riley and even boy bands like Antony Costa from Blue.  The list is endless, many of whom I’m pleased to call my friends.

The best place would be the Alhambra Theatre when I toured with Annie the musical. Because all through my childhood I went to watch panto there and it was an amazing achievement for my family to see me on that stage.

The worst place would be once in a care home when I was younger. I sang to two people who were asleep. Hardest gig ever, but taught me so much.

I was on a ship in the middle of a beautiful ballad to a girl and I knelt down and my trousers split wide open. I couldn’t finish the song because myself and the audience were laughing..so had I to get off!

What are you looking forward to most about returning to Cromer?

Cromer is like a second home to me. It’s been my third year here and it has a special fondness in my heart. I love the quaintness of the town. Being by the seaside for the summer is great too

There are too many. Many people have contributed little bits to my success. I’ve worked hard to get where I am and am very proud of it.

My idol growing up was Frank Sinatra and after reading his story I know I wanted to sing but, being a practical man I got my skills as a builder first. I then followed my dream.

My family will come see me. My dad, nan, aunties and uncles.

I’ll be going home and seeing my family, enjoying the time off as best as I can, by relaxing so the voice is good for the next week!