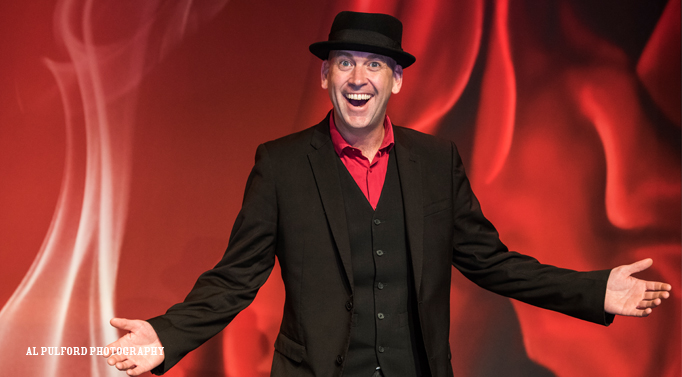 We thought you’d like to know a bit more about our 2016 Summer Show cast, so Jo, our General Manager, caught up with this year’s headline act, Phil Butler, to get to know him a bit more….

I was born and raised in Clacton-on-sea, but I got out of there as soon as I could. I’m kidding around. I loved growing up next to the sea. I don’t know if I would be in showbiz if I hadn’t seen so many ‘End of the Pier’ shows. My favourite was a show with two clowns called ‘Rolo and Shandy’. I now live, on my own, in a beautiful cottage in St. Albans.

Do you own any animals?

I have joint custody of a lovely little dog called Vegas. She is a Chalky (Chihuahua/Yorkshire Terrier). We got her after a trip to…..well, you can probably guess!

I’d say that I was very young. You would always see me at the local joke shop, buying practical jokes and magic tricks. I was a funny kid. I can remember going to primary school with an invisible dog. It was a stiff lead and collar, which I would make pull me around and stop at lamp posts, before getting yanked off again.

I was only 18 years old, but I remember it like it were yesterday. It was a birthday party for Emma, the daughter of a work mate. I still have the show on an old VHS tape, although I don’t own a VHS player. I charged the princely sum of £5 and I think I might have ripped them off. Emma is now 34 and recently came, with her Mum, to one of my shows.

I have been so blessed with the amount of globe trotting I’ve done. I’ve been lucky enough to see the whole world. I’ve been to pretty much every Caribbean island, the far east, Europe, Australia…, you name it really. I’ve never actually performed in America, but I’d love to. I think Americans would love what I do.

Over the years, I’ve had the great honour of performing for our armed forces, to give them a much needed moral boost and an escape from the horrors of war. I believe that my biggest professional achievement has been my work entertaining these brave men and women. I’ve been to the Falkland Islands, Northern Ireland, Bosnia, Croatia, Iraq, and Afghanistan. I was the very first performer in history to ever perform on the frontline of any war. I did a show at a “Forward Operating Base” in Musa Qala, Afghanistan and had the overwhelming honour of receiving the ‘Operational Service Medal’ for my time there.

Too many to name here, as I’ve worked with so many amazing acts, over the years. I did many tours with an old Cromer favourite, Bradley Walsh, which was a wonderful time for me. I’ve supported some incredible singers too like Joe Longthorne and Gene Pitney. I have recently warmed up the crowd for Paul Zerdin’s tour after his win on “America’s Got Talent 2015”. Paul is now a firm friend as are guys like Bobby Davro, Joe Pasquale and Shane Richie. From the comedy circuit, Micky Flanagan, Lee Mack, Michael McIntyre and Jimmy Carr are always great guys to hang out with.

Where is the best place you have gigged and why?

Well that would have to be a gig in Kandahar, Afghanistan. There were thousands of soldiers for the UK, America and Canada, among others and I had a dream of a show, everyone just got it. The memory of the wall of sound, from the laughter I received, will stay with me to my grave.

Where is the worst place you have gigged?

Everyone has bad gigs, especially at the start of their career and I think my worst was about 3 years in. I’d always been told that as long as you do your time, you’ll get paid. Well this crowd started to ‘boo’ me very early on, and it’s not a very nice feeling to know that you’ve still got another 40 minutes of it. They were cheering in the end, but only when I said that I was leaving.

Have you ever had any embarrassing things go wrong during a gig?

Yes, it was the opening night of the Seaside Special Show ’99 in Cromer. Yes, the Pavilion Theatre was the scene of my most embarrassing moment. I needed to get a woman from the audience to the stage for a magic trick. I came down into the audience and saw a woman in the front row, with no shoes or socks on, which made me think that could make a silly bit of business up about it. I grabbed the woman from her chair and walked towards the stage. The next thing I hear are the words “I can’t walk!” I froze and turned around. Sure enough, there she was on the floor. Okay, what now? So I start to ad lib, “What do you mean you can’t walk love? Don’t you know this is my opening night? I’m starring in a pretty big show here. Are you telling me that out of all these people, including my family and reviewers, might I add, I’ve picked the one person who can’t walk”? Luckily the audience loved it and so did the reviewers, even the woman in question found it funny and came back many times during the season.

What are you looking forward to most about returning/spending the summer in Cromer?

It has to be the people, from Front Row Jo who comes to as many shows as she can, and has become part of the theatre family, to the backstage crew and front of house, to the folks who come year in and year out to see this amazing show.

There was a Maths teacher at my high school who would say that if we knuckled down and worked hard in the first half of the lesson, he would show us some magic tricks in the second half. I’m still in touch with Mr Pennifold, thank you Bob. Other great Mentors were magicians Sid Smith and Len Blease, and comedian Micky Zany.

The usual suspects. My family will make an appearance and my daughters wouldn’t miss it for the world. There will also be plenty of showbiz types along to see what i’m up to, I’m sure.