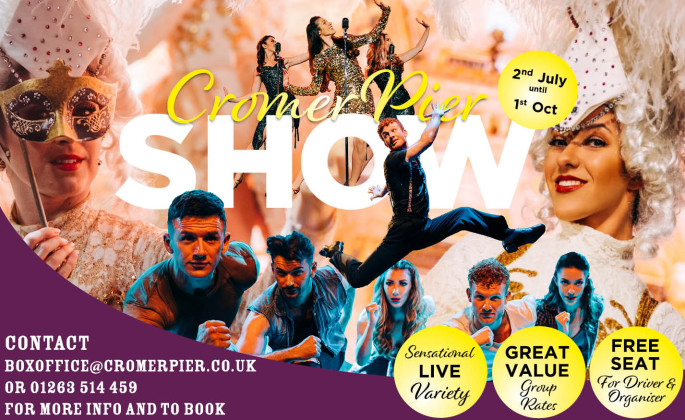 We are thrilled to announce that the award-winning Cromer Pier Show is back and tickets are now on sale!

The Award-winning Cromer Pier Show is back for 2022. We have been working hard behind the scenes to bring to you a spectacular Cromer Pier show this year! We will be keeping the same exciting new format that was so popular in 2021 with a new special guest act joining the amazing cast each week, so it will be like a brand-new theatre experience every time you visit.

The Cromer Pier Show is great for ages with a mix of traditional and modern variety entertainment to suit everyone. The new 8 metre video wall introduced last year delivers sensational special effects and combined with traditional scene sets and dazzling costumes the 2022 Cromer Pier show is guaranteed to live up to it’s usual West End production values!

If you are stepping in to the new normal never having seen the Cromer Pier Show before, then 2022 is the year to do it and experience the delight and fun of the ultimate theatre experience. (Note: the show is suitable for the whole family from children to grandparents to enjoy with traditional seaside innuendo shaping much of the modern comedy format.

To compere and host the show, we are delighted to present one of Britain’s most inventive comedy talents, Ben Nickless, Ben proved to be very popular with our audiences when he performed last year as a guest act and wowed audiences with his quick wit, physical comedy and hilarious impressions, who can forget the Freddie Mercury sketch? we can’t wait to see what he has in store for this year.

Joining Ben, and performing at Cromer Pier theatre for the first time, breathtaking skills from circus artist, Nadia Lumley, Nadia has had an illustrious career and has performed with Cirque du Soleil and on stage and screen for Vivienne Westwood, Ed Sheeran and Jay Z. Her performances on the Cyr Wheel, hula hoops and breakdancing are sure to set pulses racing.

Show-stopping vocal talents from Ferdinand De Leon and Holly-Jane Crowther. Ferdinand is from Los Angeles and performed in the UK for the first time at the Thursford Christmas Spectacular in 2021, Ferdinand has performed and travelled the world on-board luxury cruise liners. Ferdinand will be partnered by Holly-Jane Crowter. Holly trained at D&B Academy of Performing Arts and The London School of Musical Theatre and has performed as a soloist in “Sunday at the Musicals” Les Miserables the concert, South Pacific the Musical and Sleeping Beauty, to name just a few.

For any questions, please contact the box office; e-mail boxoffice@cromerpier.co.uk or call 01263 512495.