The theatre is calling and the Cromer Pier show is back, bigger and better than ever before! Join us from Monday 19th July as ‘FREEDOM DAY’ breathes life back in to the Cromer Pier theatre. Read more… 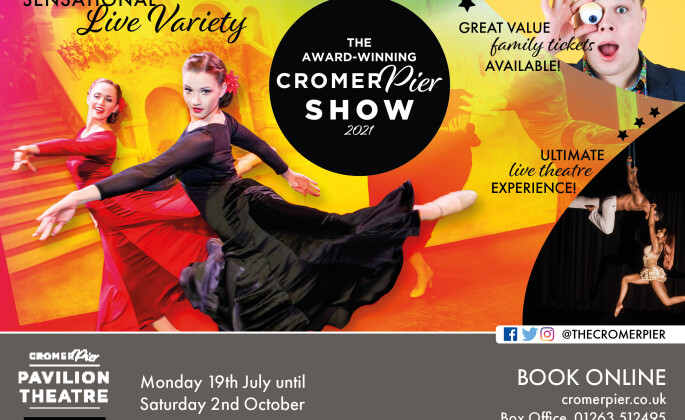 The theatre is calling and the Cromer Pier show is back, bigger and better than ever before! Join us from Monday 19th July as ‘FREEDOM DAY’ breathes life back in to the Cromer Pier theatre.

It’s the moment we’ve all been waiting for and with stars from BGT, favourites from past years and the cream of new variety talent joining the amazing Cromer Pier show cast, 2021 is sure to be one of the great years to remember in the 43-year history of this heritage attraction – the last full season end of pier show in the world.

You will be amazed at all the glitz and glamour from the Cromer Pier dancers and you will experience some of the best production values outside of London’s West End and a brand new 8 metre deltapix video wall has been installed to enhance your viewing pleasure. Expect a huge variety of fun, laughter, spectacle, song and dance.

We are delighted to present comedy genius, Phil Butler to host the 2021 Cromer Pier Show, his hilarious visual comedy and creativity will leave you still laughing and enthralled long after the curtain has gone down.

Joining Phil each week, and performing at Cromer Pier theatre for the first time, the incredible Circus and Aerial act, Duo Fusion will blow your mind with their passion-filled, mesmerising acrobatic performances, all done without safety nets or wires.

The power house vocalist and Cromer Pier Show favourite, Rob McVeigh will be joining the 2021 cast. Rob was thrown into the limelight on the BBC hit show Any Dream Will Do in 2014 and Rob will be partnered by the elegance and sophistication of Marina Lawrence -Mahrra. Marina trained in Musical Theatre at the Urdang Academy and Guildford School of Acting. Since graduating, Marina has worked on stage as a singer and actor-musician.

New for 2021 we are excited to bring you a brand new format, we have a different guest performer joining us each week bringing you more variety than ever before and even more reasons to come back and see another show! Our guest act for the opening week and performing on FREEDOM DAY is one of our favourite comedians, the comedy sensation ‘Tucker’, his warmth and comedy genius is the perfect way to kick off this spectacular season.

Join us and experience the delight and fun of the ultimate live theatre experience with a sensational variety of talent.

The show must go on and we will laugh, sing and dance once again!

More details, show dates and details of all our guest acts can be found here…