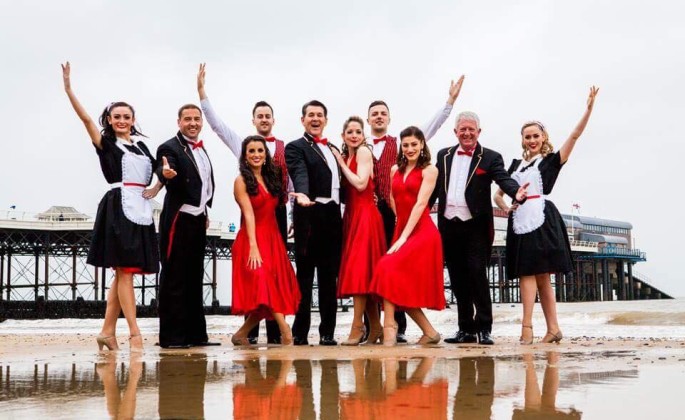 The corridors are quiet, the dressing rooms empty and just the odd stray sequin still lingers on the floor having  escaped the power of the hoover,  sadly the record breaking  Cromer Pier Christmas Show 2017 is over.   Hailed as the best ever by the press, it certainly was the fastest moving Christmas Show ever, with a record number of costume and scene changes, keeping our super talented crew very busy.

Thirteen  was certainly not unlucky for us with the thirteenth Christmas Show attracting the best ever audience numbers in the history of the show,  more family tickets were sold than ever before, highlighting that more children are experiencing the joy of live theatre and a new generation of variety lovers is born.

A Cromer Pier Christmas wouldn’t be Christmas without the legendary headline Olly Day.  His warmth and gentle humour generating throughout with guests arriving as an audience and leaving as friends.  Olly was joined by long term pal and musical genius Leo Shavers, what he can’t get a tune out of isn’t worth thinking about.  His Irish penny whistle version of The “Lonesome Boatman” written by Finbar Furey in 1962 left the auditorium in silence.  Lots of  crazy comedy magic, that towel sketch (if you’ve seen it, you will know) and the Andy Pandy Sketch, simply hilarious.   Reunited on the stage once again Rob McVeigh and Emily Yarrow, a dream vocal partnership.   Emily’s version of Pie Jesu had us all reaching for the tissues once again and Rob’s energetic and imaginative Joseph montage, a particular highlight. Returning to the roots of his breakthrough on BBC show “Any Dream Will Do”the montage featured a magnificent technicolour dreamcoat designed by Laura Whyte and skilfully hand made by Beryl Patterson.   The Seaside Special Dancers headed by Dance Captain Amy Grimshaw, Lucy McFerran, Gemma Foulkes, Amy Ward, Connor Parkinson and Paul Edwards thrilled the audiences with their versatility, fast costume changes and tireless work rate, the little stars from Marlene’s School Of Dance providing those heart melting moments.

If you missed out on all the fun, don’t worry Cromer Pier Christmas Show 2018 will be on sale very soon, if 2017 is anything to go by, best book early to secure your favourite seats.