Show 2 opens to a standing ovation and a glowing review from the chairman of The National Piers Society. 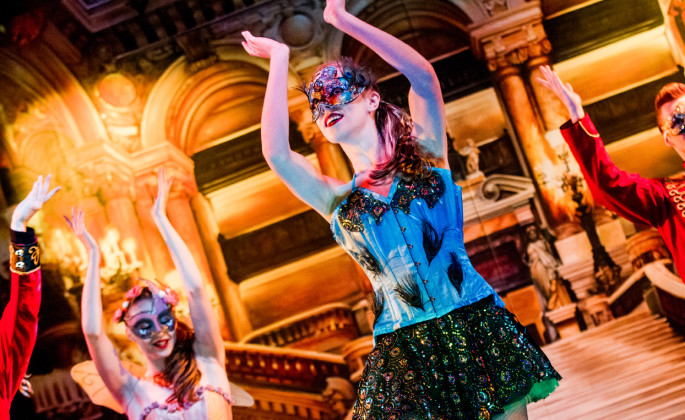 It was an auditorium filled with anticipation as the house lights dimmed and the Company burst onto stage with an aptly named opening number ” We’ve got a show”. Amid the energy, lights, music, glitz, high kicks and flicks there was a real buzz about Show Two.

What a difference a couple of weeks make. Headliners Steve Terry and Graham Noble ( G )
were on top of their game. Brilliant camaraderie enabled them to introduce side splitting ad- libs, and their mutual respect allowed both to feed each other lines and keep the audience in stitches. How they have matured and become the perfect comedic double act – their timing split second perfect, the little nuances and gestures so remeniscent of Morecambe & Wise at their peak. This is what I wanted to see after the tantalising flashes of brilliance in Show One!.

Show Two is a Cromer Classic. Pacey, high energy, engaging, entertaining and that all important emotive roller coaster of light and shade which makes a good variety show great.

The big showcase numbers from stage and screen are here, together with delightfully emotive and evocative classical interpretations. Harvey James and Emily Yarrow have also found their mark, with delightfully passionate performances. This is dramatic interpretation at it’s best as more than a tear is shed among the totally absorbed audience. Yarrow’s performance from Madame Butterfly is nothing short of stunning.

” G” demonstrates his brilliance as a comedy writer in the side splitting sketch ” A spot of Birdwatching”. With more than a hint of Gerald Wiley and Talbot Rothwell the humour builds throughout the sketch until the whole auditorium is awash with laughter. Double-entenre comedy at it’s greatest and all in the best possible taste!. Steve Terry works the script and the audience superbly and the off piste ad- libs leave the audience howling with laughter.

Suzie-Q and Zooka bring a new dynamism to traditional magic tricks with drama and theatricality. Keeping an old hand like me who has seen it all entertained they must be good!.

The stunning costumes, superb lighting and effects, and wonderful hand painted stage sets are the trademark of an Openwide variety production, and in Show Two, Amanda Hill, Laura Whyte and Ian Westbrooke have excelled. Nigel Hogg is his usual brilliant self with musical mastery.

Guest choreographer Sarah Langley brings a new interpretive twist to the superb high energy Freedom routine which features the wonderful child stars from Marlene’s School of Dance. But it is resident choreographer Di Cooke who steals the show with a beautifully evocative interpretation of Autumn Leaves, and a sentational and daring rendition of Phantom of the Opera. I am so weary of the overworked Phantom set pieces, but this has to be seen to be believed!. Artistic, audacious creative brilliance!.

The mirth, merriment and tears of joy and laughter are over all too soon as the entire Company assemble to perform the finale, a tribute to everything 80′ s entitled “You can’t stop the music”. Like all good finale’s it starts a slow burn and ratchets up through the gears until the audience are singing, dancing in the aisles and clapping along to a high octane glitzy conclusion with silver ticker tape firing from a ship’s funnel all over the audience!.

That exceedingly rare gesture of approval for a variety show, a standing ovation brings a classic production to its conclusion, and leaves me grateful that the last full season end of pier variety show in the world has Rory Holburn and Steve Cutbush as it’s guardians. The future of variety is safe in the capable hands of Openwide.