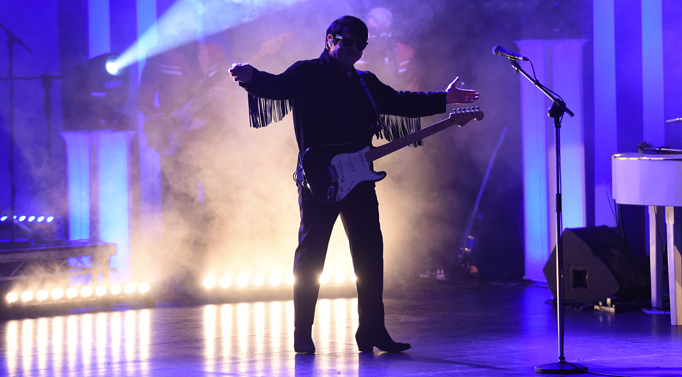 In 2023 Barry Steele reaches a very special milestone as he has been touring the UK with his own show for 15 years.  Another milestone is reached in  2023, marking 35 years since the conception of The Traveling Wilburys and 35 years since Roy Orbison passed away.

In 1988 Roy Orbison Joined ‘The Traveling Wilburys’- and in The Roy Orbison Story we create an incredible finale as the whole cast comes together to celebrate THE original supergroup.

In 2017 Roy Orbison songs were remastered by The Philharmonic Orchestra – in The Roy Orbison Story we proudly present our versions of these masterpieces.

Chris Isaak collected many awards on behalf of The Orbison Family – he also recorded many of Roy Orbison’s songs – we return the compliment with Barry Steele performing stunning versions of Blue Hotel and Wicked Game.

Roy Orbison worked with KD Lang on many occasions - we turn it upside down and present a song written by Roy, recorded by KD and sung by Barry Steele.

So do you think you know what’s in The Roy Orbison Story – we can assure you it’s a bit different.

Barry Steele and a fabulous cast of musicians and singers will take you on the continuing musical journey, the 85th Anniversary Tour will delight you, from The Black and White Night right through to The Traveling Wilburys and beyond - with so much more in between. They promise they’ll have you dancing in the aisles, in an evening packed with Rock and Soul, with special guest Spencer Jordan as Buddy Holly and big screen projection.