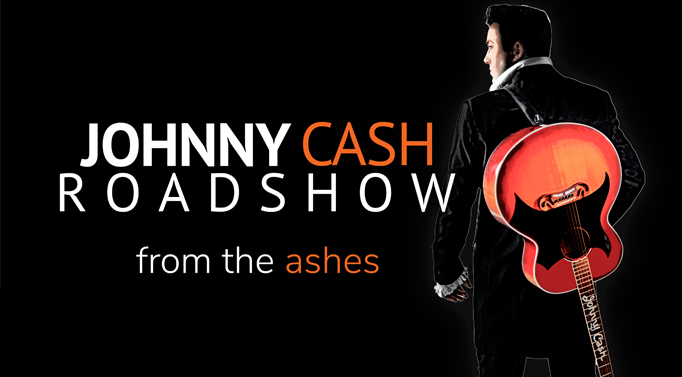 The Johnny Cash Roadshow is back on top form for 2022  with the From The Ashes tour.  Award-winning Clive John pays homage to Cash’s Career as the Man In Black, alongside his iconic Wife June Carter played by Meghan Thomas the Roadshow Horns.  With all the hits such as Man in Black, Walk the Line, Ring of Fire, Boy Named Sue alongside some of the darker more atmospheric songs from the later American Recordings such as The Man Comes Around and Hurt making this year’s show an emotional roller-coaster of songs through Cash’s career, packed together in one fantastic evening’s entertainment.

Receiving standing ovations every night The Johnny Cash Roadshow is the biggest and best celebration of Johnny Cash in the world today guaranteed to leave you wanting more.

Clive sings moves and acts just like the 'Man in Black.' The Johnny Cash legend will continue.... Lasse Lindfors - Author and lifelong friend of Johnny Cash

Every bit as Dark as Cash himself (York Mix)

‘A voice better than the original’ (John Wheatcroft, York Mix)