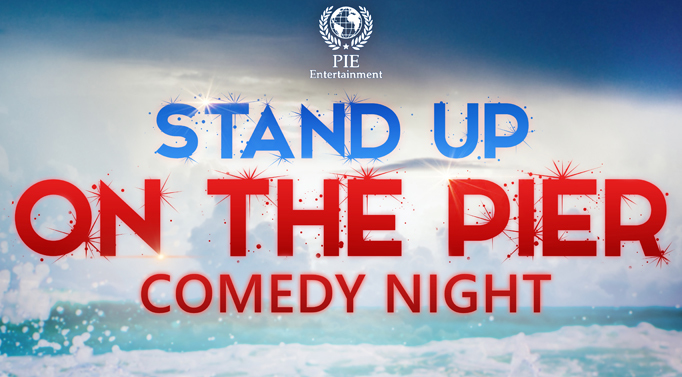 STAND UP ON THE PIER - COMEDY NIGHT

PIE Entertainment,  one of the leading bespoke comedy suppliers in the UK

Nonstop laughter with top-notch comedians to suit all senses of humour.  Have your funny bone well and truly tickled at this great value and unpredictable evening that promises copious amounts of pure comedy!

Starring a top host and introducing some of the finest and funniest acts on the UK comedy circuit today.

Matt Richardson is one of the hottest and fastest rising comedians on the circuit, Matt has made a name for himself presenting some of the biggest shows on television, including The Xtra Factor, Celebrity Haunted Mansion, and The Hangover Games, all whilst presenting the Drivetime Show on Virgin Radio. In addition to all his presenting, he's been a guest on Roast Battle and The Chris Ramsey Show (Comedy Central), Celebrity Juice, I'm a Celebrity: Extra Camp, CelebAbility, and Love Island: Aftersun (ITV2), Celebrity Squares and The Chase: Celebrity Special (ITV1), Big Brother's Bit on the Side and Lip Sync Battle (Channel 5) and hosting a brand new show on E4 and Channel 4.

Comedian and Norfolk legend Ben Langley is best known for his cute-comedy persona and for his appearance on Britain’s Got Talent.   He wowed the audience and judges with his ‘Misheard Lyric Routine’, which has since gained over 18 million views on YouTube.

Nigel 'Boy' Syer is a unique funny man who is Norfolk born and bred. He has left his accordion behind!

Harry Stachini started performing comedy after attending a Hot Water Comedy course in 2013 at the tender age of 18 and since then was named in the top 3 of the Southport New Comedian Of The Year competition in 2014. Harry is beginning to establish himself as a strong new act on the comedy circuit with his easy-going style along with his likeable character which just adds to the brilliance of the stories and the unexpected one-liners that have crowds in stitches.

(Host Comedian) Patrick Monahan blends a high-energy comedy style with hilarious and engaging topical and observational material. Known for working a room, Patrick is adored by his audiences with whom he makes an effortless connection! Winner of the 2011 ITV1 series ‘Show Me The Funny’ which led to the release of his debut DVD ‘Patrick Monahan Live’ (2 Entertain)

Get buckled up and ready for a rip-roaring night of big laughs from the professional laughter makers.

*Suitable for ages 16 and above only