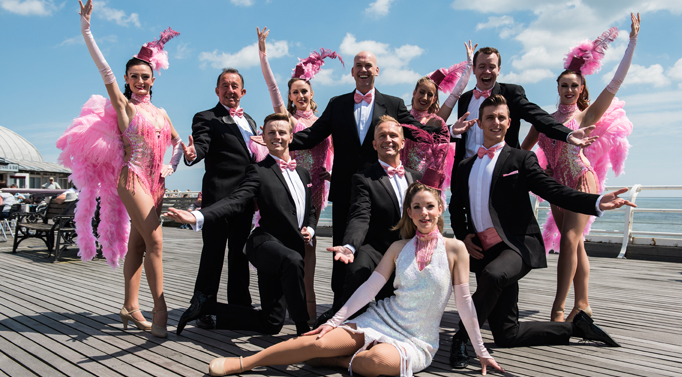 A wonderful morning of bright blue skies, still conditions and lots of excitement, for the Press Launch of the  40th Cromer Pier Show on Thursday 15th June 2017 at 11am.

We were delighted to share this special occasion with our friends and loyal supporters  from the local press and were thrilled to be  featured by the national press  The Times  for the very first time.  Local business owners, the local community, friends of the theatre and the Cromer Pier team were also invited for an exclusive short sneak preview and an opportunity to take photographs of our famous show prior to opening night.

There was a fantastic buzz of  anticipation in the audience as the complete cast took to the stage with the dazzling opening number performance “Showstopper” with The Seaside Special Dancers in gorgeous flamingo pink feathers.  Phil Butler, James Bustar and Joey Howard provided the laugh out loud comedy moments and Emily and Lee, both highly acclaimed vocalists are a perfect pairing on stage.

Afterwards there was an opportunity to meet the cast and creative forces behind the show.  Followed by photographs on the Pier decking.  Coffee and locally baked pastries were served in the theatre bar.  Press pack bags included full cast biographies and just as a bit of fun, a stick of famous Cromer Pier seaside rock and a “I Love Cromer Pier” badge were included as a keepsake of the occasion.

A fantastic opener to the season, bring on the 40th Cromer Pier Show, we just can’t wait,  Don’t miss it!