Be prepared for more tears of laughter this week as the award-winning comedy impressionist ‘Ben Nickless’ joins the Cromer Pier Show cast. Ben is another comic genius so we can’t wait to see what hilarious comedy he has in store for us! Read more… 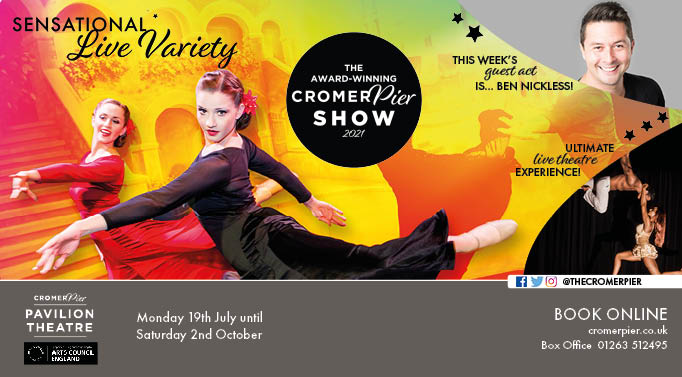 Performing at the Cromer Pier Show for the first time this week, we have the award-winning comedian, impressionist and actor ‘Ben Nickless’!

Prepare to be both thoroughly entertained and charmed by his incredible repertoire of impressions and comedy. Ben has been performing forever but his career took off in 2006 when he won his episode of the BBC television series ‘Let Me Entertain You’ alongside Brian Conley.  Since then Ben has become extremely popular on the comedy circuit and in summer season theatre shows including numerous appearances at the Babbacombe Theatre, Torquay; the Royal Hippodrome Theatre, Eastbourne and at Blackpool North Pier alongside the legendary Cannon & Ball. Ben is also one of the most promising pantomime comics in the country working alongside many household names including David Hasselhoff, Craig Revel Horwood, Christopher Biggins, Su Pollard, Les Dennis to name just a few.  In 2019, Ben was very honoured to win the award for ‘Best Pantomime Comic’ in the UK at the Great British Pantomime Awards.  He has been supporting Shane Richie on tour during 2021 and he is delighted to be joining the cast of the award-winning Cromer Pier Show for the very first time

Ben Nickless is performing from Tuesday 14th September until Sunday 19th September. For dates, times and to book, click below.