We are in for a hilarious show this week as the fabulous Christian Lee joins the Cromer Pier Show cast. Christian is an exceptional magician and comic genius so we can’t wait to see the comedy magic he has in store for us! Read more… 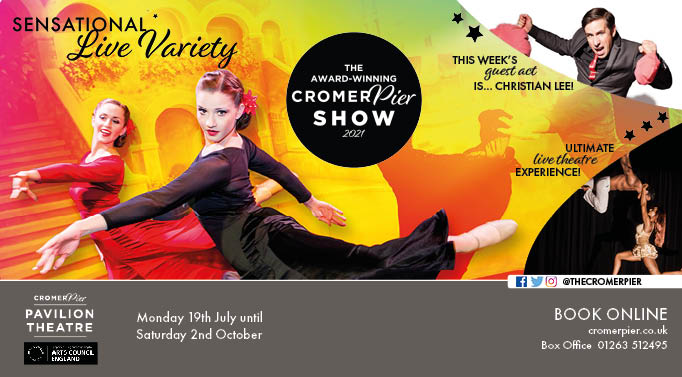 We are in for a treat at the Cromer Pier Show this week as the hugely talented Christian Lee joins our amazing 2021 Cromer Pier cast. Christian reached the live finals of Britain’s Got Talent in 2016 and has surpassed the milestone of 500 million hits on you tube worldwide with his unique style and wacky performances.   An associate with the Inner Magic Circle he is leading the way and has been dubbed as “The King of Comedy Magic” by Time Out.

“You entertained us so brilliantly well”. “You know how to work the audience, I had a big smile on my face. It was silly and stupid, but all in a great way” – Alesha Dixon Christian won over family audiences with his performances on BBC TV show The Slammer, has a cult following from his star role in Sky TV production Max Magic and performed indents for ITV hit show Harry Hills TV Burp.

With his universal appeal he is a popular comic lead starring as Wishy-Washy and hosting shows. He has travelled the Globe with his solo comedy-magic show. Performing on the high seas on board some of the largest cruise liners in the World and touring internationally with Tui at their family resorts.

He can also be found touring his theatre show “Britain’s Got Magic UK” across the UK and produces, hosts and provides special performances for private events. Christian is a regular speciality act on the internationally touring “An Evening of Burlesque”.

Christian is one of the few magicians who genuinely crosses the divide between comedy and magic. He possesses the comic genius of Tommy Cooper along with world class skills as a prestidigitator” – TNT Magazine

Christian Lee is performing from Tuesday 7th September until Sunday 12th September. For dates, times and to book, click below.