For the next two weeks expect loads of fun variety entertainment at the Cromer Pier show! Fun for all the family as one of the worlds top ventriloquists, Kieran Powell joins us! Read more… 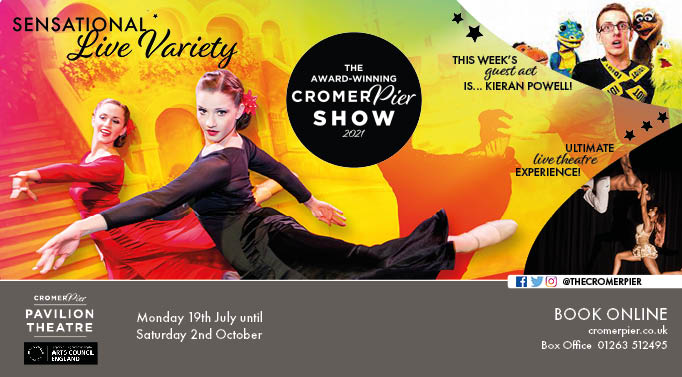 We are really excited to announce our special guest act for the next two weeks is Kieran Powell. Kieran is one of the UK’s finest variety acts and one of the world’s top ventriloquists. He has thrilled audiences with his highly amusing, original and compelling show including grand West End theatres, corporate events, pantomime and on board prestige cruise lines so we can’t wait to see what he has in store for us at the Cromer Pier Show! Kieran Powell began his journey at just 5 years old, finding a passion for magic and entertaining, even creating his own on-stage persona Mr. Magic Man.  By the time he reached 11 years old he was looking for a new challenge and discovered ventriloquism.  Quickly realising that this was what he wanted to do for the rest of his life, he began to watch you tube videos of famous ventriloquists and bought a few puppets from his local toy shop to practice but soon discovered that he needed an original character to develop, with this in mind he created his buddy Angus from a soft toy.  Angus still features in his show despite having a few face lights along the way. By the time he was 18 years old Kieran was performing in the West End to royalty and entertaining the athletes at the 2012 Olympics.   At the start of 2016 he released a DVD of his sell-out success show “Speak for Yourselves* featuring everyone’s favourite characters in a hilarious 2 hour show plus special features created exclusively for DVD.

Kieran Powell is performing from Tuesday 24th August until Sunday 5th September. For dates, times and to book, click below.