It’s almost time…don’t miss the chance to be a part of the most talked about vintage event this year. 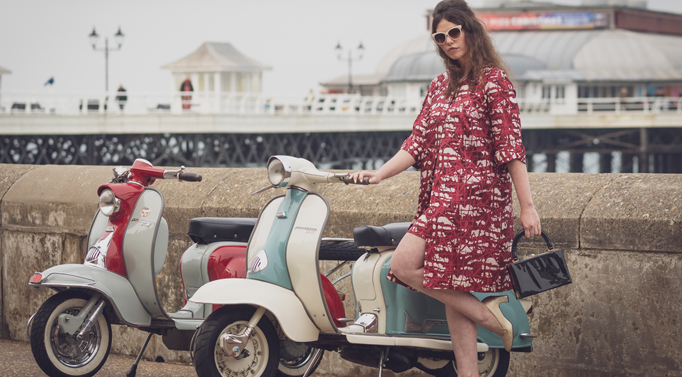 Cromer Pier, a unique venue, the jewel in the crown of the North Norfolk coast and home to the only award winning full season end of pier show in the world, is adding to its existing eclectic mix of entertainment with the introduction of a new annual festival celebrating the sixties and the resurgence of interest in all things vintage.  The festival has real credibility and is an opportunity for enthusiasts of the era to congregate, demonstrate and reignite their passion for the era that brought us The Beatles, Twiggy, Pirate Radio, The Mini and so much more.

The Searchers farewell tour reaches its climax in the theatre on Thursday 28th March in one of the final four shows before the band take well-earnt retirement after over fifty years in the business.  Fans queued for over two hours and over 300 tickets were sold for the event at a priority pre-sale following the penultimate gig in September 2018.

Cromer Soul vintage vinyl DJ’s Piers “Hitman Hawkins” and Trevor Half Nelson spin the discs on Friday 29th March at the Pavilion Bar. Enjoy the music from the era as it was intended to be heard on authentic vinyl. From Mod to Motown, Soul to Ska, a veritable A-Z of monster tunes from popular music’s finest decade.

For the main event on Saturday 30th March leave the modern world behind and travel to Cromer in style on board an original Route master double decker red bus. Pick up at the War Memorial at Holt at 10.15am on the dot, Sheringham station at 10.45am sharp and arriving at Cromer church at 11am.  Return journey leaves Cromer at 4.30pm. The advance ticket purchase of £7.00 return is essential as tickets will not be available on board the bus. Tickets can be purchased online or at the box office.

The arrival of pirate radio in 1964 changed everything for the record industry, the BBC and defied the government on land and sea. This is an exclusive opportunity to share the experiences of the original radio, and reuniting for the first time in years at the Pavilion Theatre at 11am, pirates Keith Skues, Roger “Twiggy” Day, Nick Catford, Peter “Chicago” Murtha and Peter Phillips. Shipwrecks, sinking and surviving against all the odds, hear the breathtaking accounts told by the guys that were actually there including original footage, a meet and greet and book signing in the bar afterwards. On display, a selection of full-scale models of the ships including the Mi Amigo kindly offered for display by Melvyn Johnson.  In 2013 the owner of the Caroline ship Ross Revenge Peter Moore commissioned David Ward to take away the transmitting mast and sell it off in bits for fundraising, these pieces went all over the world. There is one piece left, approximately 7ft tall with a pair of handcuffs locked on it and we have it for you to look at on the day. The tale of this mast which was shipped out in pieces, assembled and set up by the crew in the middle of the North Sea after the famous 300ft mast fell in a storm. Take a look at a series of photographs of the mast being dismantled to display with this iconic piece of Caroline history, kindly offered by David Ward. Tickets are just £5 including a keepsake programme for this two-hour feast of knowledge and experience, an absolute must for all pirate radio enthusiasts, available online, at the box office or at the door.

On the pier and promenade throughout the day, come and see in the flesh on the pier forecourt one of the most iconic film star vehicles of the era, an 18 feet long Chitty Chitty Bang Bang, made famous by the 1968 hit musical and a Chitty themed dance display from the little stars at Marlene’s School Of Dance. Experience the awesome sight of RNLI Lester launched at 10.30am, live music all day courtesy of Rock The Lobster, vintage trade stalls will enhance the promenade offering an eclectic blend of vintage goodies for sale. If you dare, grab a selfie with a full-size Original Red Series 2, Invasion Planet Earth Dalek and an Earthwork Invader To Earth Version Cyberman, both lovingly restored and offered for the event by their owner following appearances on the TV series Doctor Who.

The arrival of hundreds of scooters, classic motorbikes and vehicles on the promenade is certain to set pulses racing, an opportunity to take a look at collectors pride and joy to create a real air of nostalgia to the day. The promenade will be marshalled from 8am for vehicles wishing to exhibit on the promenade on a first come first served basis, entry will be at the Melbourne slope access point via the event marshals and all vehicles must exit via the Melbourne Slope by 5pm.  There will be no other vehicular access on the day (except emergency vehicles).   Please adhere to directions from the marshals to gain safe entry and exit from the promenade.

At the Pavilion Bar enjoy the return of the rollback £1 a pint between 11am and 12 noon and 2pm and 3pm (while stocks last) and the classic sixties sparkling drink that symbolised swinging Britain in the sixties Babycham (while stocks last).   Dig deep as we auction a real collector’s piece at 3.30pm, a red fender style electric guitar signed by sixties legends Herman’s Hermits, Union Gap, Marmalade, The Dreamers and The Searchers complete with a letter of authenticity kindly offered by Stagedoor Entertainments – an absolute must for all collectors, fans and enthusiasts.

An exclusive version of the critically acclaimed concert version of the hit west end musical “All Or Nothing The Mod Musical Experience” written especially for the event by producer Carol Harrison starring the brilliant multi-talented West End cast and will grace the theatre stage on Saturday evening The musical has received rave reviews and this special, unique evening is guaranteed to deliver an authentic, mod-tastic night of entertainment.

Openwide Coastal is planning to develop this event into an authentic annual weekend event over time to become a firm fixture in Cromer’s diverse entertainment calendar showcasing the pier as a unique and desirable location for festival events.

Tickets for events and more information head over to cromerpier.co.uk

Timings may be subject to change

If you are visiting from outside the area, spoil yourselves and make a weekend of it and stay at the grand and imposing Red Lion Hotel on the seafront.   Stay in one of their luxury rooms on Friday and Saturday night and get Sunday night absolutely plus breakfast on all three days free of charge and a complimentary bottle of wine in your room on arrival to get in the mood.

Vintage clothes for the photoshoot supplied by Wake Up Little Susie http://www.wakeuplittlesusie.co.uk/