We are guaranteed a week of fun and laughter for all ages as Cromer Pier favourite, comedian Steve Terry joins us for week 3 of the Cromer Pier Show! Read more… 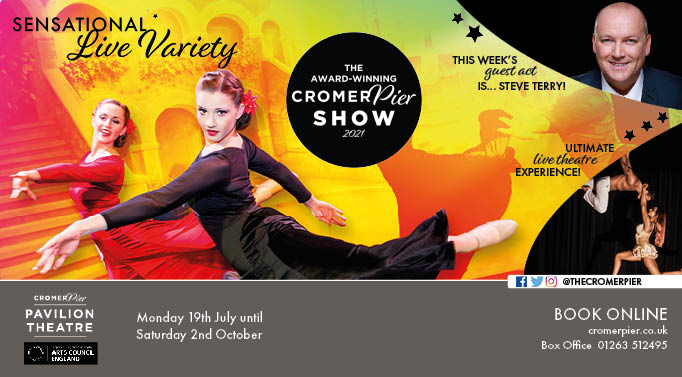 With more variety than ever before, the new guest act joining our amazing 2021 cast for the third week is a Cromer Pier favourite; Comedian ‘Steve Terry’.

Steve is an experienced, affable and brilliant comedy performer who has the natural ability to adapt comedy to suit the audience around him, making him one of the best comedians in the business.  Steve is no stranger to our famous stage compering The Cromer Pier Show in the summer of 2018 and performing one of the finest comedy gold moments in the show’s rich history, the birdwatching sketch with The Man They Call G. Steve Terry is an accomplished presenter, stand-up comedian and a very gifted vocalist, thrilling audiences in theatres, holiday centres, hotels, corporate events and on board luxury cruise liners, travelling the world. His comedy provides a great afternoon or evening out for any age!

Growing up he was always the class clown, always the funny one amongst his friend group, always loved being in the spotlight and centre of attention so becoming a comedian and entertainer was written in the cards.   His inspirations growing up were comedy greats Tommy Cooper and Bob Monkhouse and he began his stage career becoming a world famous Butlins Redcoat at 21. The progression from coat to cabaret star has been an impressive one and over the years he has developed his act with a warmth and authenticity that appeals to all generations of audience from 9 to 90 and beyond. His greatest achievements have been to work alongside comedy legends including Frank Carson, Jimmy Jones and Norman Wisdom.

Steve Terry is performing from Tuesday 3rd August until Sunday 8th August. For dates, times and to book, click below.