Be prepared to be entertained this week at the Cromer Pier show! Week 5 is looking full of fun for the whole family with new guest act; comedian & ventriloquist Max Fulham. Read more… 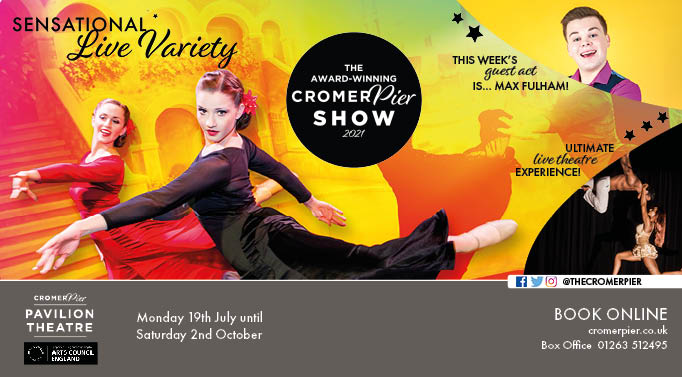 The huge variety of entertainment continues with a very special guest act joining the amazing 2021 cast this week ; comedian and ventriloquist ‘Max Fulham’.

Max’s love of entertaining was sparked performing made up shows to anyone who would stand still for long enough – family, friends and even neighbours.  Since then he has been hooked on all things comedy and ventriloquism.  He has just performed on the brand new ITV show ‘Game of Talents’ hosted by Vernon Kay and has also recently appeared on the new CBBC series of the cult children’s programme ‘Crackerjack’(‘Crackerjaaackk!!”). Max has endeared himself to Pantomime audiences throughout the UK and was the voted the Best Speciality Act in the British Pantomime Awards. During 2022, Max will be heading off to Sydney Australia to appear as Muddles in Snow White at the brand new Sydney Coliseum.  Max has created his very own comedy series Drivel Pedlar (YouTube) and lectures and perform his shows online.   He took part in ‘Sunday Night At..Charity Gala’ at the Theatre Royal, Brighton and The New Alexandra Theatre, Birmingham with Gary Wilmot,  ‘Live at the Regis’ in Bognor Regis with comedy Star Joe Pasquale and most proudly appeared in his first Solo Show at the prestigious Blackpool Magic Convention 2019 Including the GALA show alongside Vegas star Lance Burton.

“Annoyingly good! Great to see that the future of ventriloquism is in safe hands”  Paul Zerdin

“Beside being charismatic and full of charm Max Fulham is one of the best ventriloquists I have seen and believe me I have seen hundreds world wide. If you want to be super entertained and amazed book Max for any event.” Uri Geller

Max Fulham is performing from Tuesday 17th August until Sunday 22nd August. For dates, times and to book, click below.