Another spectacular week of entertainment at the Cromer Pier show! This week we have new guest act; comedy impressionist Jon Clegg joining us. Read more… 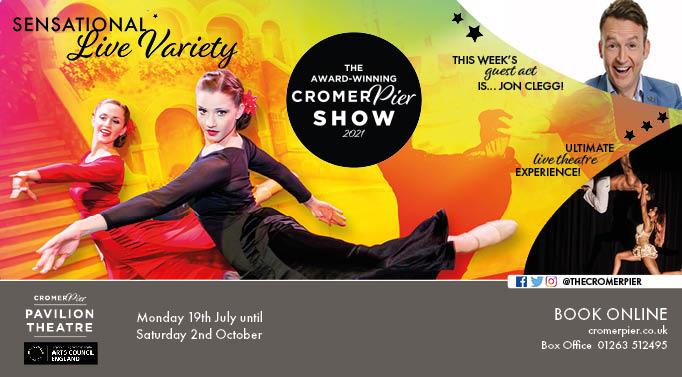 Jon is a modern and vibrant comedy impressionist with over 25 years of touring under his belt performing his original brand of comedy, vocals and impressions throughout the UK and the world . In 2014 Jon catapaulted to the final of Britain’s Got Talent, with his many voices, including Alan Carr, John Bishop, Michael McIntyre and BGT legends Ant & Dec and Simon Cowell as they watched on!  Jon was invited to perform again in the Britain’s Got Talent 10th Anniversary Celebratory performance alongside Diversity, Ashleigh & Pudsey, George Samson and Stavros Flatley during the live TV final in 2016 to over 11 Million viewers. Jon has entertained audiences of all ages for over twenty years, performing in Theatres, on Cruise Ships, Corporate events and touring shows as well as using his skills to voice characters in TV and radio shows and various adverts. He has been heard voicing celebrity characters such as, Harry Styles and on ‘Newzoids’ the satirical puppet animation sketch show for ITV, poking fun at politicians, pop stars, sports faces and TV celebs and most recently on Amazon Prime’s Football pundit show ‘Back of the Net’.

Jon is delighted to have been asked to perform at the legendary Cromer Pier show – expect to see plentiful comedy, impressions and lots of fun for sure.

Jon Clegg is performing from Tuesday 10th August until Sunday 15th August. For dates, times and to book, click below.